The “Feng Huang Yuan Fuxi Emblem” was launched on November 15, 7:00am (Beijing Time). 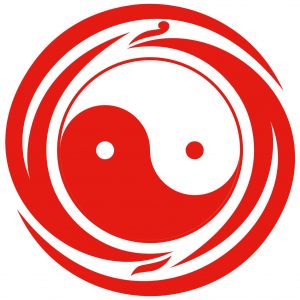 Now, let’s briefly introduce to everyone why the Feng Huang Yuan emblem was redesigned?

The highest divinity of Taoism – one of the Three Pure Ones, Daode Tianzun (Taishang Laojun), criticized the design of the Tian Gong emblem and the Feng Huang Yuan emblem for major flaws and errors.

Tian Gong logo was designed in 1990, and at that time, it was called the Tian Gong “Unity of Heaven and Humanity” emblem. Feng Huang Yuan was born in 2011, and its emblem design continued to perpetuate the flaws of Tian Gong emblem for ten years.

Every time in the face of adversity, the fortunate blessings, protections and support from divinities have put Tian Gong back on the right track, enabled Feng Huang to spread its wings and soar again, and gave the founder new strength and vigor to lead students who are shouldering a mission to continue walking on the great path of the “Three Rescues”.

In order to help Feng Huang Yuan undertake a thorough-going reformation, build a “disease-free” team, create miracles in life, facilitate the ascension of humanity, and give impetus to the leap of civilization, the Chinese Primogenitor God – Emperor Fuxi bestowed upon Feng Huang Yuan the “Fuxi Taiji Diagram” at his birthplace and in this regard, the major decision to redesign the Feng Huang Yuan logo was made.’

At this crucial moment when Feng Huang Yuan is doing away with the old and welcoming the new, and building on the past and creating the future, Grandmaster Nengzhe (Grandmaster Datong’s Emanation Body) delivered a “Saying of Grandmaster Nengzhe” on April 22, 2021:

Know the mistakes made in the preceding chapter,

Take them as lessons learned;